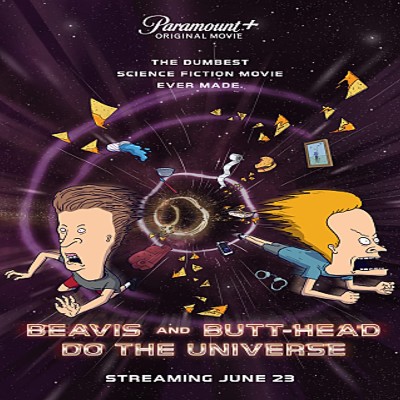 A benevolent judge decides to send the teenagers to the Johnson Space Center, entrusting them to the care of Captain Serena, who is leading the mission to dock with the space station and view the wonders of the black hole. Beavis and Butt-Head join the mission, misunderstanding Serena’s interest as something sexual, and destroy the space shuttle as they leave Earth. Serena decides to throw the boys overboard, sending them into a wormhole that transports them to 2022 Earth. Serena is now running for re-election as governor of Texas, and Beavis and Butt-Head are still interested in scoring with her…Beavis and Butt-Head Do the Universe (2022 )

You should know that Beavis and Butt-Head Do the Universe (2022 , dir. Mike Judge, Idiocracy ) is an animated comedy film that takes best friends on an adventure in outer space. This is the second adaptation of the animated series Beavis and Butt-Head and the sequel to Beavis and Butt-Head Do America (1996). This weird animated epic reaches a wider audience while still retaining its core gritty, humorous situations and time travel goofiness. The cartoon is full of the usual low-brow jokes, whether it’s funny-sounding words that make both teens giggle, or the endless fun.

The Man from Toronto 2022 Review – DownPit