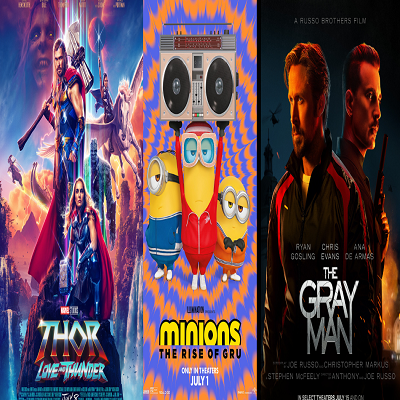 Here I presented you with a list of mega hits that are yet to release in July 2022. All die-hard fans of cinema is waiting for this movie for a long time. You can check out the list of is following movies and watch reviews of trailers here:-

1. Thor: Love and Thunder
Thor: Love and Thunder, the much-anticipated sequel to 2017’s Thor: Ragnarok, will finally hit theatres next month in July. With only a few weeks to go, we’ve been treated to a slew of teases, films, and TV advertisements that have unveiled Natalie Portman’s Mjolnir-wielding Jane Foster and new MCU villain Gorr, the God Butcher. Natalie Portman, who returns as Jane Foster as Mighty Thor is anticipated to take over the superhero role in the franchise. Taika Waititi, who also directed Thor: Ragnarok, believes Jane Foster was underwritten in the first two Thor movies. LookMovies is a free movie streaming service that allows you to watch movies without having to join up or pay anything.

2. Minions: The Rise of Gru
Kyle Balda, who also helmed Despicable Me 3 and Minions, is the director of Minions: The Rise of Gru, with Brad Ableton and Jonathan del Val acting as co-directors. Brian Lynch and Matthew Fogel wrote it. The production companies are Chris Meledandri, Janet Healy, and Chris Renaud. This prequel’s narrative is set in the early 1970s, among vintage art, disco music, and bright clothing, all of which were distinctive hits of the time. Gru comes up with a plan to become a known villain with the help of his newfound Minions, lead by Kevin, Stuart, Bob, and the newcomer, Otto. Prepare to join Kevin, Stuart, Bob, and Otto on their quest to find the young Gru, on a crazy mission.

3. The Grey Man
The action thriller, based on Mark Greaney’s novel of the same title, revolves around Court Gentry, the CIA’s greatest mercenary whose actual identity has been kept hidden from the world, including the agency itself. When Court discovers a network of dark secrets linked to the CIA, he flees assassins hired by his psychopathic old colleague Lloyd Hansen. The Gray Man stars Ryan Gosling as Court, Chris Evans as Lloyd, Dhanush, Ana de Armas, Regé-Jean Page, Jessica Henwick, Billy Bob Thornton, and Alfre Woodard. The project has been in the works for almost a decade, with Ad Astra’s James Gray engaged to helm and Brad Pitt scheduled to act, though the two would later depart and Charlize Theron would enter talks for a gender-swapped version, which also fell apart.