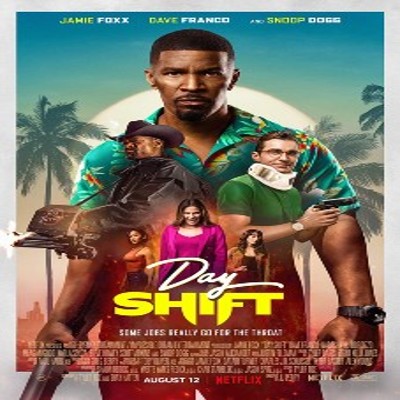 The script was written by Shay Hatten and Tyler Theis. Three leading roles were played by well-known actors: Jamie Foxx, Snoop Dogg and Dave Franco.
The focus of the fantasy-comedy action movie Day Shift is a young black man, Bad Jablonsky, who lives in sunny Los Angeles. He is full of energy, hardworking and works daily in the field of cleaning pools. But this is only a cover, because the city is filled with terrible creatures and they are all killers. These are vampires who are destroyed by members of the secret organization Trade Union. The fact is that Yablonsky did not differ in an accommodating disposition and he was simply expelled from this organization that pays for each destroyed vampire. Now Bud urgently needs $10,000, otherwise his eight-year-old beloved daughter and wife will leave for Florida.

Bad Yablonsky understands that hunting for vampires is not just a bloody occupation in the name of exterminating killers, it is also a great way to earn money, so he joins the Trade Union and agrees to all the conditions put forward by his head. Bud is given a novice for a run-in, the new guy turns out to be an impressionable and desperate coward, but in the process of work, Yablonsky patiently brings all the information to him by his own example, reinforcing the theory with entertaining examples from practice. Bud is an experienced hunter, and we can say that the beginner was lucky, if not for the mentor’s dark humor and colorful demonstrations.

But experience is of great importance, and Bud tries to dispel the newcomer’s romantic flair from watching Twilight sagas on TV during real contacts with vampires that are cute only at first glance. The guy manages not only to wet his pants, but also not to keep his own lunch in his stomach. For that, animal instincts will save his life in the future and will allow him to earn a tidy sum in his account.